Home / Language development / Why is the incidence of learning difficulties higher in boys? 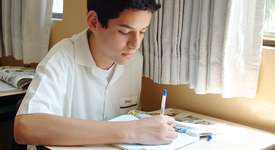 Why is the incidence of learning difficulties higher in boys?

When we asked neuroscientist and Speech Pathologist Dr Martha Burns this question, she told us all about the Geschwind-Galaburda hypothesis, which states that differences in maturation rates between the left and right hemispheres of the brain are mediated by circulating testosterone levels, and that sexual maturation acts to fix the hemispheres at stages of development after puberty.

Albert Galaburda (Harvard University) has been studying learning disabilities among males for about thirty years. He originally studied with a man named Norman Geschwind and they began looking at this because stuttering is more common among men (did you see “The King’s Speech”?)

The role of the  left hemisphere

Almost all learning disabilities that involve left hemisphere skills, like reading, language and maths, are more prevalent among boys than girls. Galaburda started speculating very early (his first paper was published in the 80’s), that the left hemisphere, which handles symbols and language, matures at a different stage than the right hemisphere.

Galaburda believed (and now has tremendous research to support this), that testosterone can interrupt the migration in a very subtle way but just enough that you get little cells that migrate to the wrong spot in the left hemisphere (ectopias). You get these little embryonic clusters of neurons that never become neurons because they migrate to the wrong place – and that is what he believes contributes to most of the severe learning disabilities like dyslexia and other learning disabilities that involve migration.

Interested in learning more about the Fast ForWord program? Have a question about learning, neuroscience and/or education? Contact the team of health and education professionals at Sonic Learning.