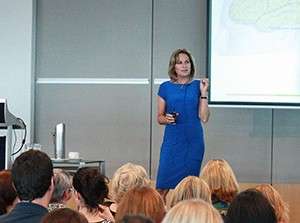 Dr Martha Burns, Neuroscientist and Speech Pathologist, reveals 4 of the latest Autism research findings for 2015. These exciting findings highlight the excellent work that is being done by scientists around the world, who continue to answer important questions about autism.

1. Autism is in the genes

Genes are critical to the development of neurons in the brain. “Studies have identified genes and genetic mutations that may contribute to ASD. Two such studies have uncovered 60 genes that have a greater than 90 percent chance of contributing to ASD among 500 or more genes associated with ASDs overall¹“.

“More investigation is needed to dig deeper into the roles of these genes and how they affect the developing brain,” says Dr Burns, “but those data are emerging”.

What happens differently in the brains of children with ASD? “Pruning is the process by which a brain weeds out unimportant connections and strengthens the important ones, based on experience,” says Dr Burns. “In a recent report published in Neuron², the scientists reported that ASD may be associated with higher levels of a molecule that may impair the ability of brain cells to get rid of dysfunctional cell components.”

White matter tracts have been described as the “superhighways of the brain” that transfer information between parts of the brain. Scientists have studied the development of white matter tracts in infants who were later diagnosed with ASD³. Their findings indicate that “the trajectory of white matter development may be abnormal even a few months following birth in those who go on to receive an ASD diagnosis. In simple terms, the superhighways of the brain are not working as efficiently in children with ASD as they are for typically developing children.”

Researchers also investigated whether early behavioural intervention changes brain functioningª. Summarising the article, Dr Burns reported “Children who completed the intervention had faster neural response and higher cortical activation when looking at faces compared to objects, and it was also associated with better social behaviour. Those who received treatment as usual (a common community intervention) showed the opposite pattern.”

Find out more about our programs

Find out how Fast ForWord can help children on the Autism Spectrum to improve their language, processing, listening, attentional skills and some aspects of social skills.

Find out more about how we help students on the Autism Spectrum.

Contact our team on 1300 135 334 or fill out our contact form to find out if a neuroscience based program is right for you or your child.