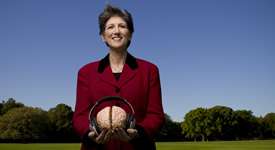 Paula Tallal, Rutgers Board of Governors Professor of Neuroscience, has been named Inventor of the Year by the NJ Inventors Hall of Fame for her work bringing positive change to over 3 million children and adults with the Fast ForWord program.

Dr Tallal is one of just 4 inventors being honored with this award on October 18 – the Hall of Fame recognises “inventive achievements which have had a positive effect on society.”

“For scientists, our life goal is to discover things of importance. That my scientific work contributed to inventing Fast ForWord, a series of individually adaptive computer games that enhance children’s cognitive, language and literacy skills, is beyond my wildest dream,” stated Tallal. “It is my hope that being named the Inventor of the Year by the NJ Inventor’s Hall of Fame will result in getting Fast ForWord programs to even more children who can benefit from them.”

Rutgers-Newark Interim Chancellor Phil Yeagle describes Tallal as a “giant at the center of dramatic advances in understanding the learning process. Her ‘Fast ForWord’ invention is revolutionizing learning for ever expanding populations.”

Tallal has spent more than 30 years researching the links between auditory processing, attention, memory and language and found that timing in the brain is critical for learning language and reading. The central problem for many children who struggle with language, including those with dyslexia, is that their brains have difficulty perceiving the rapidly successive acoustic changes that differentiate the speech sounds within words (phonemes), such as the difference between “da” and “ba.” To learn how to read effectively, a child must become aware that words can be broken down into sounds, and that letters represent these sounds.

Tallal and her colleagues hypothesized that the brain’s neuroplasticity (it’s ability to change and reorganise), could be used to rewire neural networks to increase processing speed and hence improve language and literacy skills – or to “fire and wire” as she describes it.

Interested in learning more about the Fast ForWord program? Have a question about learning, neuroscience and/or education? Contact the team of health and education professionals at Sonic Learning.