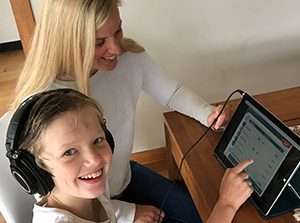 February 11, 2019
Case studies | Fast ForWord | Featured
“The changes in Jamie are just phenomenal since using the Fast ForWord program. I had no idea how big the changes would be.”

Jamie is 11 years old and in year 5. Before using the Fast ForWord program which has improved his listening, processing, attention, memory, reading and language skills, he was really struggling.

“Jamie wasn’t able to keep up with the pace of learning in his classroom. It was all too quick for him and he became bored and disruptive.

We knew enough was enough and something had to be done when Jamie started to experience social issues; he was losing friends because his learning standard was below his peers. He felt different and the worst thing was, he thought he was dumb.

It was frustrating because we knew he was a bright kid, but the teachers kept telling us that Jamie’s issues were unfixable and that he’d always fall behind.

We tried tutoring, speech pathology, occupational therapy and dietary changes to name a few but nothing seemed to make much of a difference.

Then one day I read about the Fast ForWord program in Dr Norman Doidge’s best-selling book The Brain That Changes Itself, and I knew we had to find this program.

It was such a breath of fresh air to finally be using a program that was addressing the underlying reasons as to why Jamie was struggling at school. We felt a huge weight lifted off our shoulders.

I didn’t expect to be able to see the changes quite so quickly. After only a month, Jamie was communicating so much better; we were amazed by the improvements in his sentence length and structure.

And he’s made an amazing turnaround in other areas too, his teachers can hardly believe it. He’s now reading for fun and understanding what he reads. He’s listening better, remembering more of what he learns and is able to pay attention in class.

We used to have to remind him to get dressed and brush his hair and teeth, but he’s now taking pride in doing these things independently, without prompting.

The Fast ForWord program has been phenomenal for Jamie. It has allowed him to blossom and mature, and I encourage other parents to consider this amazing program for their children.”