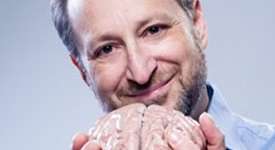 Listen to Dr Norman Doidge’s interview on 4BC Radio Brisbane below.

“We thought that the brain was like a machine, with parts – each part formed a single mental function…and that the circuits of the brain were hard-wired, that they were formed and finalised in childhood.”

“One often hears people compare the brain to a computer. This not only turned out to be wrong, but it’s actually spectacularly wrong because the way the brain really works is by constantly changing it’s wiring, changing it’s structure.”

“The implications are immense because for 400 years that view of the unchanging brain meant that if a person was born with a mental limitation such as a learning disorder…there was nothing that could be done.”

“The usual treatments for learning disabilities were always ‘compensations’: there is a weak area such as weak auditory discrimination, so you go to class with someone to take notes for you, or you take a tape recorder,” Dr Doidge explained.

“Because it’s a ‘use it or lose it’ brain, that approach is not without its difficulties, because if you have any capacity for auditory discrimination and you are not concentrating and keeping that muscle alive, [the brain’s capacity for that task] will waste away.

In chapter 3, Dr Doidge discusses the Fast ForWord program in detail, explaining how the program exercises the brain to facilitate neuroplasticity, enabling learners of all ages and levels of ability to function at a higher level.