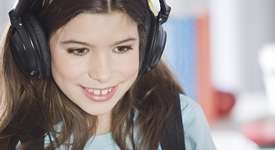 It’s not exactly news that there’s a relationship between auditory processing skills and reading disorders in children. But with research by scientists such as Elise Temple and Nadine Gaab helping to establish and confirm the connection, there is now mounting evidence to support a strong correlation – especially for children with Dyslexia.

A recent study by Jane Hornickel and Nina Kraus aimed to determine whether inconsistency in the brain’s response to speech sounds is correlated with poor reading skills. 100 primary school children with normal hearing were divided into 3 groups—good readers, average readers, and poor readers.

The authors found that the auditory brainstem response when listening to speech sounds (“ba” and “ga”) was much more variable for poor readers than for good readers, and that these inconsistencies were more closely associated with the consonant portion of the syllable than the vowel.

The authors note that the most likely explanation for the variability is poor encoding of speech sounds in the brains of the struggling readers. According to Kraus, it’s this inconsistency of brain response that prevents some children from making the crucial connection of sound to meaning that is the foundation of language and reading skills. Strong readers, on the other hand, typically make the connection with ease. The relationship between reading ability and auditory processing skills, she says, is “a highly significant relationship.”

Distinguishing between consonants can be particularly difficult for children with dyslexia because they are spoken more quickly than vowels. But consonants typically give meaning to words (think “cat” vs. “bat”), so that missing bit of information can make learning to read enormously difficult. When children with normal hearing experience reading difficulty, auditory processing plays a role.

Fortunately, our students’ brains are highly adaptable and responsive, enabling dramatic improvements with appropriate intervention. When the auditory processing issues are corrected, children are then able to make the critical sound-to-meaning connections that lead to proficient reading and improved learning all around.